MAB Association, with heartfelt condolences, offers its last farewell, full of gratitude, to Maestro Bruno Vescovo, international artist and, for MAB, juror and teacher, as well as a sincere and generous friend.

9-10-11 December 2022, at AC by Marriott Milan Sesto, the MAB Association winter camp returns: an intensive camp dedicated to the various choreographic disciplines, with teachers and professionals from the MAB circuit and instructors from accredited schools. During the event, auditions for the 2023 MAB Artistic Residencies and special events will take place, in collaboration with the association’s partners: writer Aurora Marsotto will present the book “Più luminosa di una stella” (Brighter than a star) (published for Piemme by Mondadori Libri S.p.A.) and meet the students for a Q&A dedicated to the legendary Carla Fracci; Ballet Master Matteo Levaggi will hold auditions for the production “Io… non sono solo Giselle’ (I… am not only Giselle), also dedicated to Ms Fracci, and for the masterclass in ballet and contemporary dance promoted by the La Scala Academy.

On Sunday 27 November at 3.30 p.m., the Nuovo Balletto Classico’s performance “Four seasons in different seasons”, directed by Dorian Grori, Rezart Stafa, Elena Casolari and Nicoletta Stefanescu, will be staged at the Teatro Manzoni in Milan. MAB circuit schools can attend the performance in combination with the special masterclass with Ballet Master and dancer Hektor Budlla and take part in the special meet & greet, produced and coordinated by Ms Liliana Cosi. The Masterclass and meet & greet will be scheduled to follow, in conjunction with 2023 MAB initiatives.

On 28 October 2022, Milan played host to “La Bellezza Salverà il Mondo” (Beauty Will Save the World), the event conceived by Gisella Zilembo and organised by EventiDanza, for the MAB Association, in collaboration with TAM Teatro Arcimboldi Milan. During the day, the masterclass audition took place for admission to the 2023 MAB Artistic Residencies, overseen by Ballet Master Matteo Levaggi. After the event, the 180 participants took part in a Meet & Greet at the Teatro Arcimboldi, exclusively reserved for circuit schools, with Gianmario Longoni (Artistic Director) and Paolo Rota (Technical Director).

To end the day, they attended the performance “Variazioni di Bellezza” (Variations of Beauty), a Teatro alla Scala production.

The initiative is a further example of MAB’s intention to support, promote and raise the profile of Ballet and its socio-cultural impact on young people and the wider public.

In August 2022, a delegation of teachers from the MAB Artistic Residencies school circuit took part in the professional development CAMP in leadership and management in the performing arts, at the “WFC-Performing Arts Academy” in Huittinen (Finland), under the guidance of MAB General Manager Gisella Zilembo (former teacher and coordinator at the Finnish institution) and professors Evan Schoombie and Christian Hannikainen

During the evening, two important awards were presented, created for Ass. MAB by artist and designer Ivan Nadin:

PREMIO ALLA CARRIERA (CAREER AWARD), to mark 40 years on the stage, for artistic and cultural merits to the prima ballerina ALESSANDRA FERRI

Privately, Silvio Andrea Beretta, President of Ass. MAB received from the artist Dolores Puthod a lithograph portraying Ms Fracci, who has always been a generous and passionate member of the PremioMAB cast. 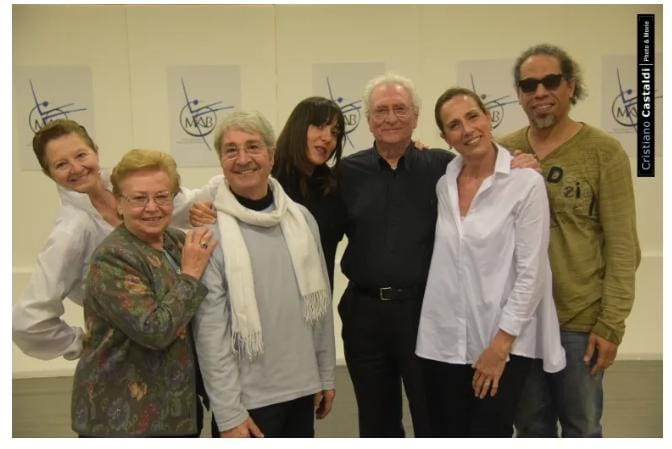